Below is an overview of the Bolt Action league rules I’ve used with success.  You’ll need to gauge your local group’s ability to field the point values called out in the rules and adjust accordingly.  Also, remove the ‘red vs. blue’ rule, if you feel your group would be better off having more open opponent restrictions.

Forces must be representative for a specific time period and/or theater, for example July 1944 through May 1945, Western Europe.

Army lists can be based on generic or theater lists. Since my group has some very experienced WWII gamers, we allow for some bending of the list rules, but point values are maintained.  So, legal lists can also be modified for historical accuracy; however, if you “break the BA rules” for a historic reason, the players must provide evidence of the historic rational.

Tank and infantry lists are allowed. (I have also run Tank only or Infantry only leagues as well.  All work, as long as people know the rules ahead of time.)

Bolt Action Version 2 rules are to be used.

I allow for a modified transport rule when running tank list only events.
Players have two options regarding transports for your troops. They can follow the BA rules and pay for a transport for each unit and use them in the game, or they can pay 50 points for a group of “virtual transports” that bring all foot units to the edge of the battlefield.

In between games, players can alter their list by changing one order die. However, if you have suffered two losses in a row, you can completely change your list before the next game.

Games must be red vs. blue and played in historically representative terrain for the forces. Era-appropriate theater scenarios are encouraged, if players are willing to try some (yes, some of these are asymmetric but worth playing). Otherwise, the basic scenarios along with the store binder scenarios are allowed.  (In my store, we maintain a binder with play testing scenarios from a variety of sources to add to the standard book scenarios.)

This league will have a painting competition component as well. On the league evening of the even numbered weeks, there is a painting competition. All painting entries must be from the player’s current force.
Week 2  – Single figure
Week 4 – Multi-man team weapon
Week 6  – Vehicle
Week 8  – Full squad (Min of 5 figures)
Week 10 - Diorama (No larger than 8” x 8”)

Players can play as many league games as they want. League games must be played at the store but don’t need to be done only on league nights. This allows for missed games or to try to overcome a loss with a win.

Only a player’s best 8 scores (painting and gaming combined) will count toward their points.  Tie break will be the tied players’ top 9 scores, and if needed, top 10 scores, etc.

By counting fewer scores than the total number of opportunities, players can make up for missed league weeks (life and business travel happens, at least in my group), and players can get in an extra game or two to “erase” a loss suffered during the league. This keeps people engaged and doesn’t allow for runaway leaders as easily.  I use 8 out of a total of 15 scoring opportunities (10 league nights and 5 painting comps), and found that it works well with the absences.  Feel free to vary this number to suit your group.

This is my basic paint list for WWII German Heer


All colors are Vallejo Model Color and designated by their number and name unless otherwise specified.

These are the base colors I use, but there are always variations among the uniform colors and from the effects of fading.  But, if you're looking for a place to start painting German figures, this should help.

I built the Rubicon Hetzer and painted it using a circle ambush camo scheme.

The Rubicon Hetzer is a great kit, and it went together well.  The only criticism I have is the one hatch should be added to the model earlier in the build to avoid potentially dropping it inside a fully enclosed chassis.  Other than that, this kit went together very well and provided an excellent opportunity to try one of the more difficult camouflage schemes. 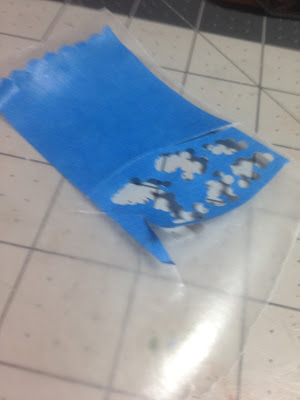 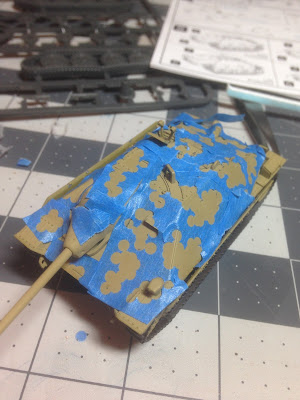 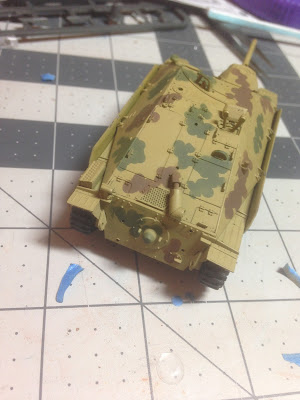 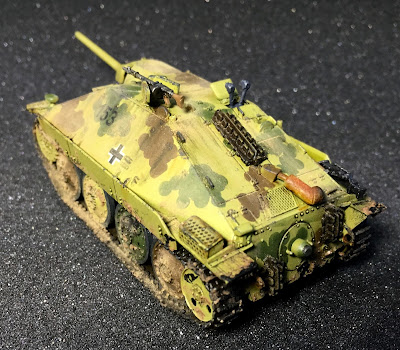 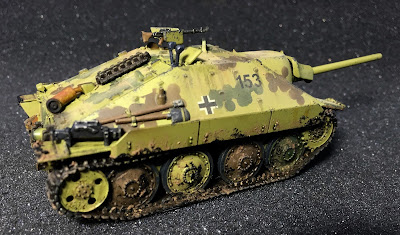 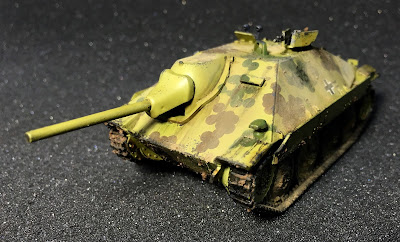 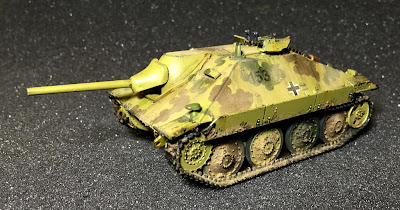 Here's a super simple project that could add a nice detail to your next WWII game.

Using some tank treads from the Rubicon German Stowage Set 1, I created some immobilized markers to indicate when tracked vehicles have been, well, immobilized.

There isn't much of a "how to" with this project; I basically glued some of the tank treads from the Rubicon German Stowage Set to some bases, primed, painted, and added flock.  The pictures tell the story.

The stowage set is awesome, and it will add a lot of detail to several models. 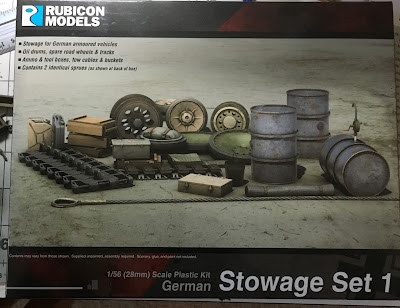 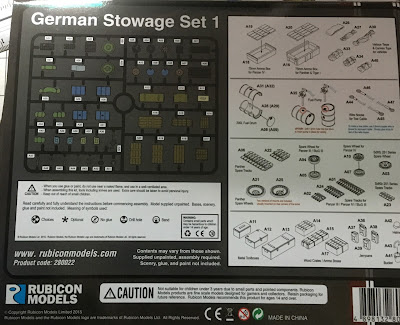 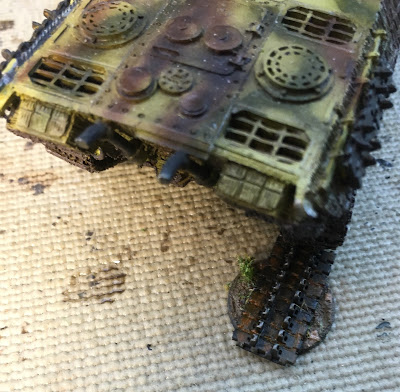 I decided to tackle an experimental project I've been considering for some time.  I wanted to try painting figures on the sprue prior to assembly.  This allows for a lot more airbrush work and faster painting.  The big question I had was, "how bad would the final product look?"

I decided to start small and paint a sprue of Warlord U.S. Infantry and a sprue of U.S. weapons.  This results in five figures and a lot of extra arms, heads, weapons, kit, etc.

In the end, the five figures took 2.5 hours to paint, assemble, and base.  I think adding a few more sprues will take advantage of the economy of scale, and my estimate is 20 figures in 5 to 6 hours.  That will be the next experiment.

I started by painting uniforms, heads, arms, and hands.  The paints used are all Vallejo model color except as noted, and I used a Grex airbrush with a 0.3 mm needle for all the airbrush work.


I mounted the legs/torsos to their bases, and at that point, I hand painted all the straps and boots.  The rest of the uniforms had already been airbrushed.

The metallic parts of the rifles were painted by hand while still on the sprue.  Sorry for no pictures of those two steps.

I then assembled the figures and found very few places that needed any hand painted touchups.

I decided to use Army Painter Strong Tone Dip to provide the shading to keep with the theme of speed painting.


The dip was allowed to dry overnight, and then the I based the figures.

Below are the finished figures.  I think, considering the method used, they came out pretty well.  They pass the 3-foot, tabletop test. 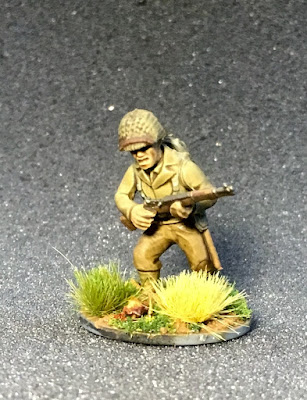 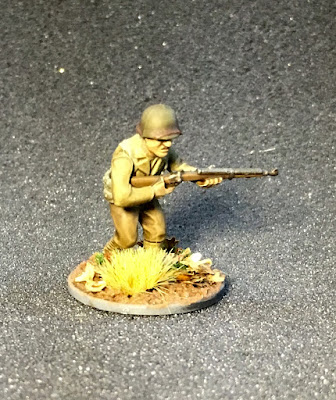 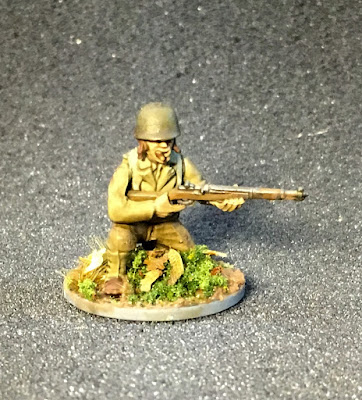 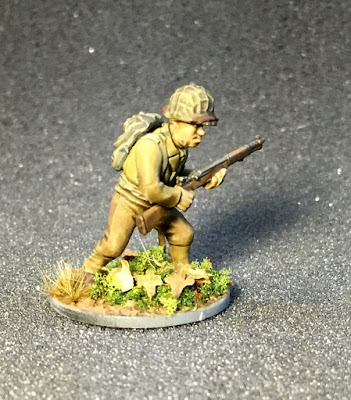 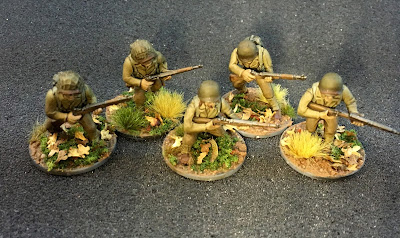 I recently finished the Rubicon A15 Crusader, and I'm very pleased with the detail and versatility of the kit.  It went together very nicely, and with a little bit of ingenuity, I was able to create two unique versions of the Crusader from the box.


Some finished shots below.  I added an antenna with the pennants showing the color/order of the day. 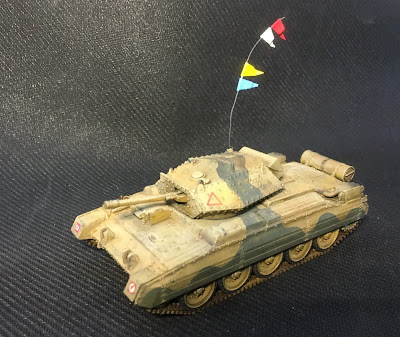 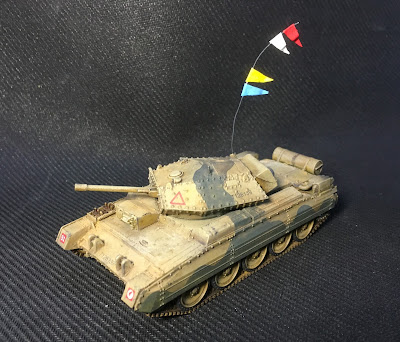 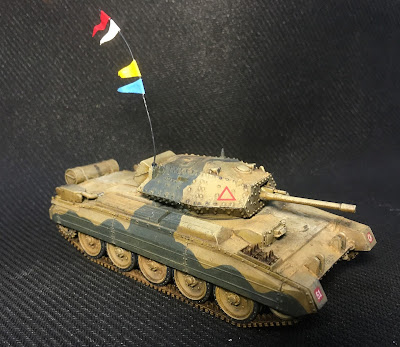 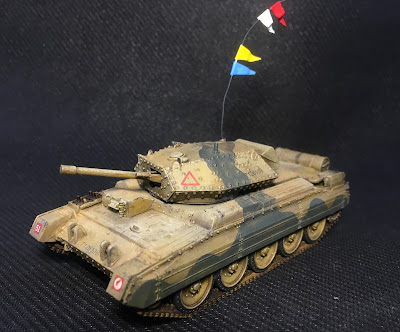 I completed the Warlord LRDG Truck - photos highlight the layering and shading of the monochrome paint scheme and culminate with some dusty weathering.  This is a fantastic kit with a good deal of detail, and the cargo provides for some variety of materials and colors to give the model unique desert character.

The metal and resin kit went together well, with little clean up. 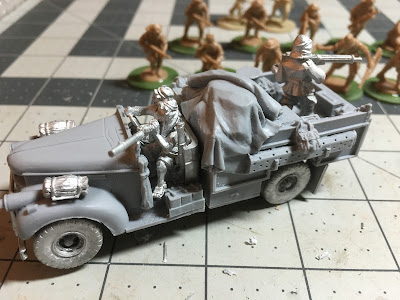 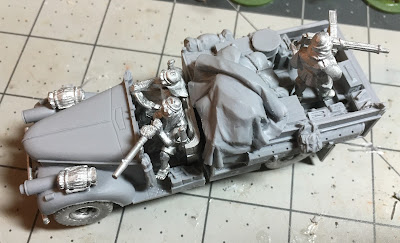 I failed to take more interim photos, but below is the "walk around" of the final piece.  Note the sun fading on the metal surfaces and areas where the blowing sand has rubbed away all the paint. 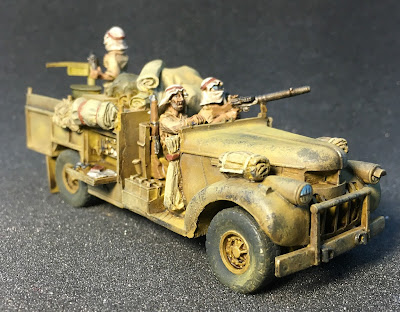 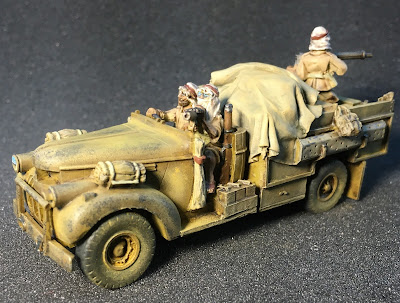 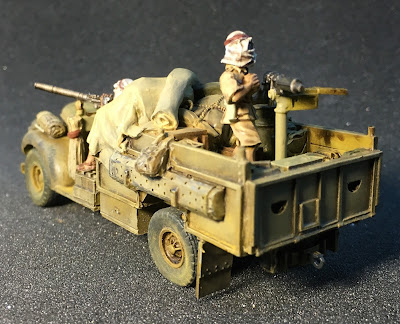 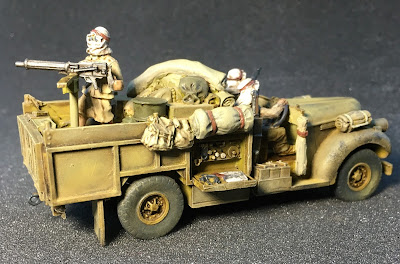 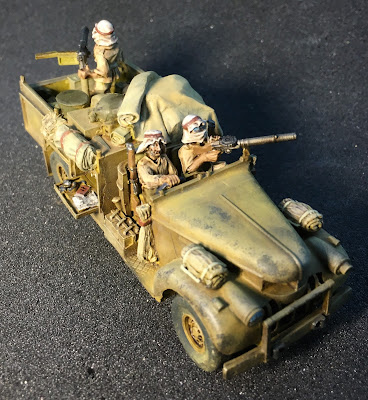 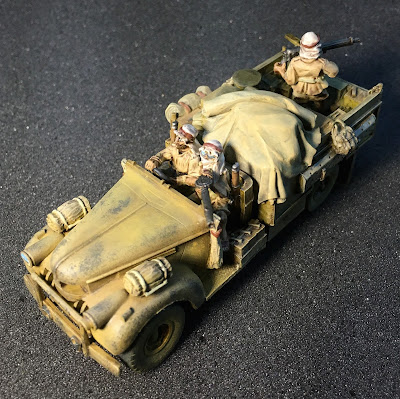 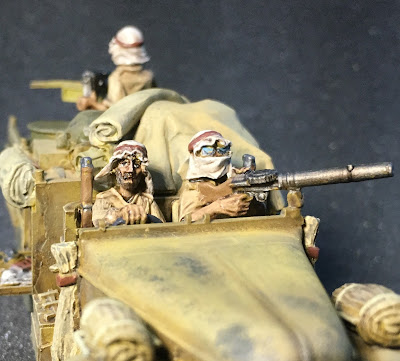